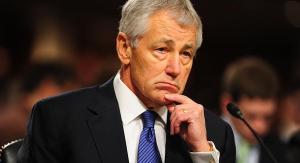 “I appreciate Secretary Hagel’s service to our country, from his time in the Army decades ago in Vietnam through his tenure as secretary of defense. I have many concerns with President Obama’s national security policies and it is not clear to me that all of this administration’s failings fall at Secretary Hagel’s feet. I hope that this is just the beginning of a shakeup of the President’s national security team to bring fresh perspectives to the unprecedented challenges we as a nation face.

“The next secretary of defense will take over a department that is suffering greatly from the impact of sequestration. Our military readiness and ability to modernize and innovate to meet future challenges are being put at risk. We need a bold leader who will speak frankly to the White House and Congress about the need to end sequestration and get the department back on track. We also need someone capable of developing a strategy to defeat ISIL and consolidate the gains our men and women in uniform have made in Afghanistan. Instead of basing military strategy solely on politics, our next secretary of defense needs to be willing to tell the President and the American people the tough truth about what will be required to succeed in those conflicts.

“I hope that whomever the President nominates to succeed Secretary Hagel meets these qualifications.”

House Energy and Commerce Committee Chairman Fred Upton (R-Michigan) and Senate Commerce, Science, and Transportation Committee Ranking Member John Thune (R-South Dakota) today led Republicans on their respective committees in writing to Federal Communications Commission (FCC) Chairman Tom Wheeler regarding the commission’s consideration of regulations that would impose 20th century common carrier rules on the Internet – a 21st century information service. Despite the failure of the commission’s two previous attempts to implement such rules, there remains a strong effort to advance policies that would hamper innovation, job creation, and investment in the widespread growth and expansion of the Internet.

“Recent proposals have suggested that the FCC can use its authority under Title II of the Communications Act to create legally enforceable rules to regulate Internet access. We believe this is beyond the scope of the FCC’s authority and would defy the plain reading of the statute,” wrote over three-dozen House and Senate Republicans.

They continued, “Reclassification would require the FCC to reverse nearly two decades of legally sound – and Supreme Court affirmed – reasoning that Internet access services are explicitly not Title II services. Justifying this course change is no easy task under current law. Among other harms, reclassification would threaten the jobs and investment made possible by the broadband industry, which the Communications Workers of America and the NAACP state accounted for more than $193 billion in capital investment and more than 270,000 jobs over the last three years.”

The letter was signed by all Republican members of the House Energy and Commerce Committee and the Senate Commerce, Science, and Transportation Committee, including:

You can get started by downloading the PDF with the questions for all of the categories.

Have questions?  Here’s an FAQ that answers all of the major questions they’ve received over the last many months.

Wondering which categories to enter?  Here’s the full list:

When you’ve decided what you want to enter, go online, set up an account, and enter your information.  You don’t have to do everything all at once.  You can save your work and go back and add to or edit an entry as well as enter additional categories any time up to the deadline of midnight on January 31, 2015.

by Adam J. Sinclair
If the Manager of your homeowners’ association has an inspiring story to tell, the judges in the 2015 National “Manager of the Year” (MOTY) Contest would like to hear it. The MOTY award honors Managers who have been responsible for major improvements and/or turnarounds in the communities that they manage. Winners receive a prestigious trophy and a cash prize of $5000. The deadline for applications is January 5, 2015. On-Site Managers and Portfolio Managers are judged separately. There is no fee to enter.

Anyone who desires to nominate a worthy Manager can use this link. Managers who would like to apply may do so online right here.
by Adam J. Sinclair

“Voters across the country have sent a clear message that they are not ready to give up on the American Dream. The American people have elected a new crop of reformers to go to Washington, end the dysfunction and achieve real solutions to the many obstacles standing in the way of all people who are trying to achieve a better life.

“I hope President Obama will listen carefully to the message the American people sent him in this election, and work with Congress to solve the pressing issues facing all Americans. The American people deserve it.

“In the coming months, I look forward to working in a Senate Republican majority to advance the reform agenda I’ve presented this year to promote job creation and higher education, help people save for retirement, improve our anti-poverty programs, and rebuild and modernize our military to meet the challenges we’ll face throughout this century.”

I remember sitting with my grandfather in 1980, when I was just nine years old, and watching on TV as Ronald Reagan accepted the Republican nomination for President. While that was the first time I was really exposed to the Reagan Revolution, the movement’s foundations had been laid in a speech delivered before I was born, on October 27, 1964.

On that day, exactly a half-century ago, Reagan spoke in support of Barry Goldwater’s campaign for president in a speech titled “A Time for Choosing.” The address is often remembered as the breakout moment in Reagan’s political career, but in truth it was much more than that — it was the moment that sparked a movement that transformed America.

In the speech, Reagan warned of the dangers of a growing government and a shrinking private economy. He pointed to signs that he believed were indicative of a diminished future: an enormous tax burden, massive budget deficits, a rising debt limit, and a less-valuable dollar.

Though Goldwater lost that year, Reagan’s message continued to be validated in the years that followed. In his 1980 campaign, Reagan built on “A Time for Choosing” by taking the founding principles he had outlined and detailing exactly how to apply them to the challenges that had subsequently emerged. Once in the White House, he proved just how effective his conservative approach to government could be.

In the half century since that speech, some of the policy debates Reagan discussed have changed while others have not. But every single one of the principles he outlined is just as relevant today as in 1964. I believe the modern conservative movement can find its roots in that speech, but I also believe it can find its blueprint for the months and years ahead, starting with the election next week.

Republican candidates today have an opportunity — and an obligation — to do what Reagan did in 1964: explain exactly what makes America exceptional and exactly what will be required to keep her that way. First, this requires defending the principles of our founding, the same ones supported in “A Time for Choosing.” Second, it requires policy ideas that apply these principles to modern challenges.

America’s founding ideals can be applied in the 21st century just as easily as Reagan applied them in the 20th century, just not in the same way. Today, we need modern reforms that recognize modern realities: that our country now faces global competition for jobs, that technology has transformed the very nature of our economy, and that our policies and institutions have failed to adapt accordingly.

Modern conservative reforms will recognize that these realities cannot be addressed with government power, but rather through a government that empowers. If we give our people a government that helps rather than hinders, a free economy that promotes growth and opportunity, and a higher-education system that equips every American with the skills needed for modern jobs, our people will do what they’ve always done: dream, achieve, and leave behind a better America for their children.